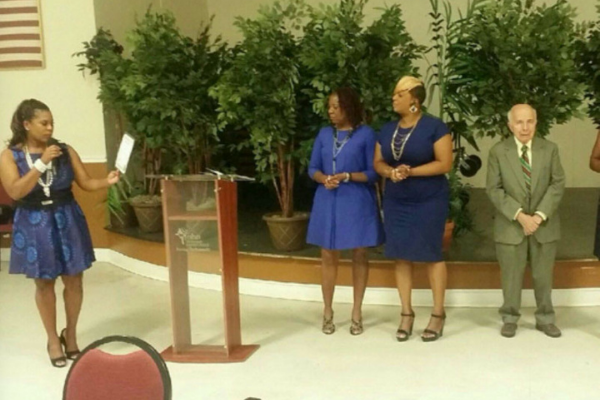 Randi Marks initially resisted signing up for our CIRCLES program.

The mother of two young children felt life was too hard. It would be nearly impossible to accomplish her goals of saving money, getting a college degree, and paying for a beautiful wedding.

But she found the energy to do the program. It was the best decision she has ever made.

Randi describes her inspiring journey to financial stability and beyond.

A few years ago, I was at a stage in my life where I was tired of mediocrity and the same struggles day in and day out. I was getting to the point that I thought the financial and personal struggles that I faced every day were going to be my life forever.

Then I learned about CIRCLES. At first, I was hesitant because it was an 18-month commitment and I was pregnant with my second child. But I didn’t want to keep banging my head against the wall and being frustrated. And so I ultimately decided to give the program a shot.

The first part of my CIRCLES journey was weekly meetings. In these meetings, we identified what were the problem areas in our lives, and alternative methods to solve them. We recognized the areas where we were thriving and the areas in which we were barely surviving. We talked of our dreams and goals. We learned how to budget and how to better handle our finances. We were educated on SMART goals.

My classmates and I bonded over our burdens, our successes, our dreams, and became each other’s support system. We became a family.

The crux of the program was to come up with three major goals that we wanted to accomplish with CIRCLES’ help. My goals were:

This was not going to be easy.

I had previously attempted school several times. I’d take a class or two, and then I would take a semester off, or as I called it, “break”, when life got in the way. I never took school serious. The more I thought of a college degree, the more unattainable it seemed for me.

I also had never had a savings account. I thought just having money left over after paying my bills was savings. I couldn’t fathom putting money aside for a rainy day, because every day was a rainy day. I was constantly trying to catch up.

At the time, I was engaged to be married and we had no idea how we were going to plan a wedding. We were barely paying rent on time each month.

With my CIRCLES support system, I applied the new techniques to my life. I started saving $15 a week. I know it doesn’t seem like much to some people, but to me that was everything. At the end of the month, I had $60 in an account that I didn’t have to use for bills or groceries. I was so ecstatic. My husband and I upped the savings to $25, then $30 and so on. I was absolutely thrilled about this. I still get excited each time I check the account. I did it!

After graduation, we were matched with our Allies. My Allies are so supportive. They were told of my goals.

When it came to my education goal, I again became hesitant of starting school. By this time, I had given birth and was the mother of a two-month-old. I was nursing. I couldn’t do school with a newborn AND a 4-year-old. The holidays were approaching. My husband’s car needed some repairs. I was applying for new jobs.

As I told these excuses to my Allies, they calmly let me know I would always be busy. There will never be a perfect time. Life is always going to happen. I digested that tidbit of knowledge, went to the college the following week, and enrolled in school. I have since been enrolled in school. I have not taken any breaks, and I have maintained a 3.5 GPA. I finished my last semester with a 4.0, and am on track to have a 4.0 for the current semester. I am beyond proud of myself.

At times, I feel like I can’t do this. There are times when I want to quit, particularly when I am leaving work after a full day and headed to class. I keep pushing. I just recently switched from an AS in Legal Studies to the Bachelors Program. I am on track to complete by June 2017.

With my newfound saving’s technique, and wanting to be able to accomplish my final goal, my husband and I were able to get married with all of the balances paid in full by the time I walked down the aisle.

All in all, 18 months later, CIRCLES has done what it promised to do and beyond.

They didn’t give us anything tangible. CIRCLES gave me the tools to do what I could ALWAYS do.

With the connections I made with other Allies and community members committed to CIRCLES’ success, I got a new job which has blessed my family tremendously. I have new friends and family I can call on when I need their support.

The weekly meetings are behind us, but the CIRCLES leaders still get together and make sure we are all on track.

We even did a charitable fundraiser together and gave back to people in need. CIRCLES have done wonders for my family. My husband and I make dream boards of our goals. It feels so good to cross something off or take it down because we have accomplished it. I preach CIRCLES to everyone I know. I tell people that they too can do it.

You changed my life forever.