Circles Taught Her To Save — $5 At A Time 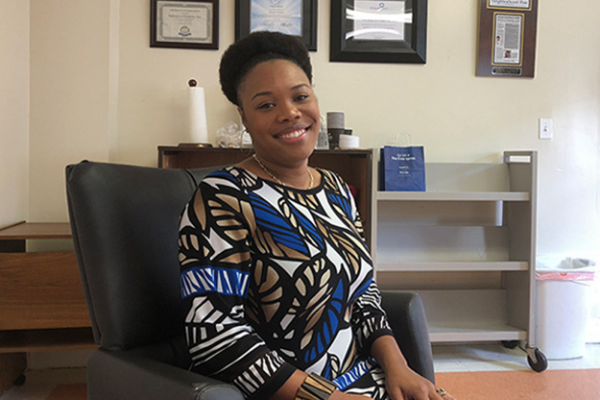 A few years ago, TaQuoya Scott, a 34-year-old mother of five boys, wanted to start a savings account in hopes of eventually buying a house. At the time, though, she would have settled for putting away just enough money to take a break from work and enjoy a long-planned vacation with her husband.

Trouble was, she and her family pretty much lived paycheck-to-paycheck.

TaQuoya, who grew up in Riviera Beach and lived in Boynton Beach, had no idea how she would alter her life and build a nest egg for the future. That changed when she learned about our CIRCLES Palm Beach County program through her job at the School District of Palm Beach County.

Almost overnight after she attended CIRCLES, she took a water jug, cut out the top, and started filling it with $5 bills.

“I’d go to a store and if I had $5 in change, it would go in there,” she said. Her husband did the same thing, month after month.

It certainly wasn’t enough for a down-payment on a house. But it was enough to purchase the couple a lovely vacation in Jamaica that they had dreamed of – and start a new approach to living more frugal and building up their saving account.

“We stopped going out to eat, I didn’t have my nails or hair done,” TaQuoya said. “We saved every dollar we could.”

Before long, she and her husband saved $20,000, enough to close on a three-bedroom house in Port St. Lucie.

TaQuoya credits CIRCLES (she graduated in 2016) for turning her life around. The program, she said, was thorough, inspiring and well-thought out, particularly this part: she was offered child care while attending classes to make it possible to focus on the curriculum instead of worrying about her children.

“I learned to save money, I learned about other people’s personalities, I learned self-awareness, I learned how to handle credit cards and I learned sisterhood – we all have the same things in common,” she said.

She also gained the confidence to start an event planning/marketing firm with her friends. In addition, she set her mind to finish out her Associate’s Degree in early childhood education within the next two years.

Her ally (mentor) Rosa Showers-White was behind many of TaQuoya’s CIRCLES successes. A fitness coach, Rosa taught TaQuoya the importance of being positive and believing in herself. They became friends, attended the same events, and went on to support each other through the toughest of days.

“We had the same energy. She taught me to take care of myself and learned how to rest – to slow down and just take a breath,” TaQuoya said.

For most of her adult life, TaQuoya had to take care of her children and had little time for herself, especially time to work on her life skills. CIRCLES, she said, gave her the opportunity to dream big and make the right choices to accomplish her goals.

“CIRCLES was a gift to myself,” she said.