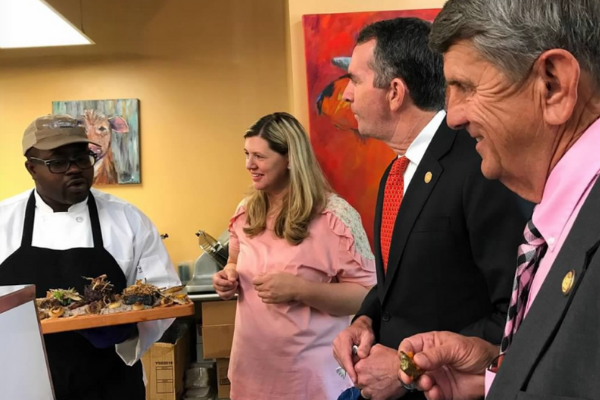 Keith Walker had prepared his signature meals for his usual patrons at a tiny eatery inside a retail store in central Virginia.

But on this afternoon, his culinary delights also would be enjoyed by another group of customers — the governor of Virginia and a slew of local officials who had traveled a long way to feast on Keith’s well-cooked short rib with cranberries and red wine, pork tenderloins with fried okra and apple chutney, and lamb ragu.

The 40-year-old father of three originally from Daytona, FL who had attended Pathways to Prosperity’s CIRCLES Palm Beach County program was chosen to serve lunch for the Virginia A-list officials who were celebrating local agriculture and chose Keith to showcase a successful business.

After a few bites, everyone was smiling into the cameras of the press corps following Gov. Ralph Northam.

Keith had finally had his break-out moment, after years of struggling to find his way in the topsy-turvy world of gourmet dining.

“It was just amazing. I was on TV and on the radio. I had worked so hard all of my life and here was my time,” he says.

For years, Keith wanted what any father wants: a good job, a nice house, and great schools for his children. And each time he came close to realizing his dreams, something went wrong and he would have to rebuild his life practically from scratch.

Yet, instead of panicking and allowing fear to paralyze him, Keith looked at opportunities ahead of him as a new chance to craft his life on a stronger and healthier foundation.

It’s a lesson he learned during CIRCLES, which helps individuals break out of poverty and become upwardly mobile through education, mentoring and personal resolve to succeed.

Keith came to CIRCLES in the midst of a career crisis. He kept getting good jobs at upscale restaurants, and then would lose them. It happened four times over a period of about five years, each loss proving harder and harder to manage financially and emotionally. The CIRCLES classes taught him to save money, prioritize his time, and aim high with personal and career goals.

“I was drained, nothing was working out for me, but I didn’t give up,” Keith says.

One of those job loses turned into a break that got him connected to the governor and his supporters.

After spending about five years in West Palm Beach, Keith and his family moved to Lexington, Virginia to work as a chef for a new steakhouse. Six months at the restaurant, he again lost his job. But he didn’t want to move back to Florida and start anew yet again, so he stayed and kept meeting people until he landed another job, just days later. It was working for a small eatery inside a retail store whose owner took a liking to Keith.

A short time later, the shop’s owner entered Keith in a local chili cook-off — and Kevin won. Word got out quickly about Keith’s cooking abilities and eventually attracted the dignitaries visiting the city on that fortunate day for Kevin in early 2019.

“I was amazed at what was happening,” Keith says.

That exposure gave Keith the confidence to go out on his own and start his own restaurant – something he has wanted to do for many years, and fulfill one of his biggest goals in the CIRCLES program.

Kevin is looking for the right building to open a restaurant in Lexington. He doesn’t know how soon that will happen, but one thing is certain.

“I’m not going to give up on my dream. I owe that to my family and to myself,” he says.